Theme: His Advocacy with the Father: He Makes Intercession with Us

The Order of Worship: Bulletin 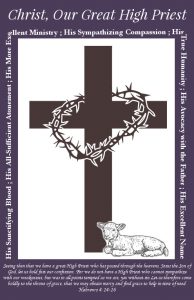 Theme: His Advocacy with the Father: He Makes Intercession with Us

22 This makes Jesus the guarantor of a better covenant.

23 The former priests were many in number, because they were prevented by death from continuing in office, 24 but he holds his priesthood permanently, because he continues forever. 25 Consequently, he is able to save to the uttermost those who draw near to God through him, since he always lives to make intercession for them.

26 For it was indeed fitting that we should have such a high priest, holy, innocent, unstained, separated from sinners, and exalted above the heavens. 27 He has no need, like those high priests, to offer sacrifices daily, first for his own sins and then for those of the people, since he did this once for all when he offered up himself. 28 For the law appoints men in their weakness as high priests, but the word of the oath, which came later than the law, appoints a Son who has been made perfect forever. (ESV)